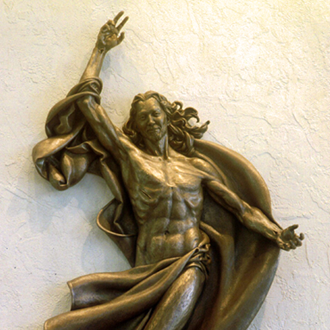 Intended as a sort of fifteenth and final Station, The Resurrection Altarpiece was dedicated at St Anthony’s Catholic Church in Portland Oregon in June of 2000.

While the Stations of the Cross were intended as a very direct and visceral interpretation of the Passion, The Resurrection, was intended as a less literal, more lyrical interpretation on the theme of rebirth, re-inspiration, or redemption.  In this piece the road to death depicted in the Stations is vindicated by a consummation that implies victory over the forces of annihilation.  If the Passion was a sort of gamble, faith in the face of certain annihilation, the Resurrection is an affirmation of the delight in attaining glory through that improbable path.  He is just awakened, seeing before him not only his own path to reunification, but the multitudes of dispirited with whom he has lived.  His expression is to say, “It’s fine.  You are welcome.   Come this way.”  In the grandest sense it is “I see this, and I see you. It is the same.”

Formally, I see the piece being about smoke, about spirals, about the drapery veil falling off as the figure arises into the less corporeal realm.  The fact that light coming off the south window would ignite the upper torso in gold while the ground light of the church would base the feet and legs in blue made the composition a natural for the transition from material to ethereal.    While the square frame of the wall demanded, and a conservative need compelled a flowing drapery, I’ll confess to a metaphoric preference to an overarching shape to tie the outline together.  Be it shell or womb, the entire is conceived as an organic frame for a life promoted as archetypal of integration between living and ideal form.