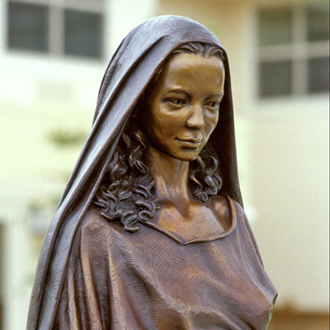 This piece was three years in the making.  It originated in 1999 as a third and culminating element in a cycle of work installed at St Anthony’s Catholic Church in Portland Oregon.  Those pieces, a Stations of the Cross and a Resurrection, emphasized the end of Jesus’ life and his triumph in the afterlife.  The Virgin, eventually to be called Our Lady of Life, was an attempt to round the cycle back to the beginning, to the conception of the savior almost as a rebirth.  Rather than an Annunciation, or a Madonna and Child, however, I was drawn to the human story of the Mother of God, specifically the miracle of one life coming to be within another.

I am intensely interested in the very human condition and psychology of Mary at this time.   It cannot have been an easy situation!  A very young girl, perhaps thirteen, unmarried, and yet in a family way.  Her guardian and husband-to-be, Joseph, protesting to the community that the child she carried was not his, had yet to hold faith with her in her unlikely story.  Were he to cast her out, her future, and that of her child could only be grim.  I imagine her at this time very ambivalent about this little life she had found herself charged with.  I see her walking in the wilderness of doubt and fear in the early months of her pregnancy.  It is impossible to see a way out.  And then there is a movement.   Mary stops and feels the baby in her womb reaching out to touch her from within.  She lays her hand against the palpitation.  She feels for perhaps the first time the full presence of this child, a miracle only a mother can know.  Suddenly there is a feeling of great calm and wonderment.  Everything will be all right, for her, for the child, and for all of humanity.  She looks up from her own belly to catch the eye of the first person she sees, smiling outward that secret serene knowledge of faith.

This work can be seen at Assumption Village in St Johns, The Community Center in Corvallis, and the site for which it was originally designed, the grotto at St Anthony’s Village in Portland.