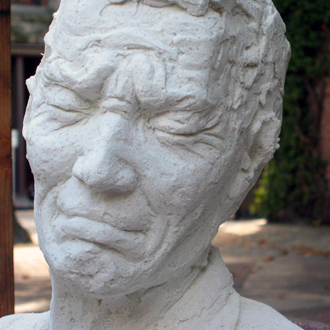 With heightened airport security due to potential terrorist threats, continued and increasing war in the Middle East, and (at the time of the installation) five years passage since Sept 11th, Seattle artist Michael Magrath created a series of site-specific sculptures intended to ask stark questions about the roots of terror.

Lot’s Tribe is conceived as a temporary memorial to the other victims of 9 /11: Three life-sized statues of Iraqi civilian men and boys, each cast in salt, were placed in Occidental Park, in Pioneer Square, Downtown Seattle for the morning of September 11, 2006. There the white, crystalline figures stood, sudden incursions of unwelcome reality into our daily lives, until the rains came and they dissolved away.

“These figures were culled from news images coming out of the Middle East over the past few years,” says Magrath. “The scenes were shocking, and I wondered why they were not more widely seen. They made me think about what it feels like to witness something so unexpected and vast; like an explosion that will permanently alter your life, and how that sort of traumatic event evolves over time. My intent was to render some sense of these scenes in as real and arresting manner as possible, a kind of 3D photojournalism — silent monuments to seemingly distant events with which we, whether we recognize it or not, are intimately connected.”

Read more in the article This Memorial Destined for Oblivion, Seattle P.I., September 10, 2006